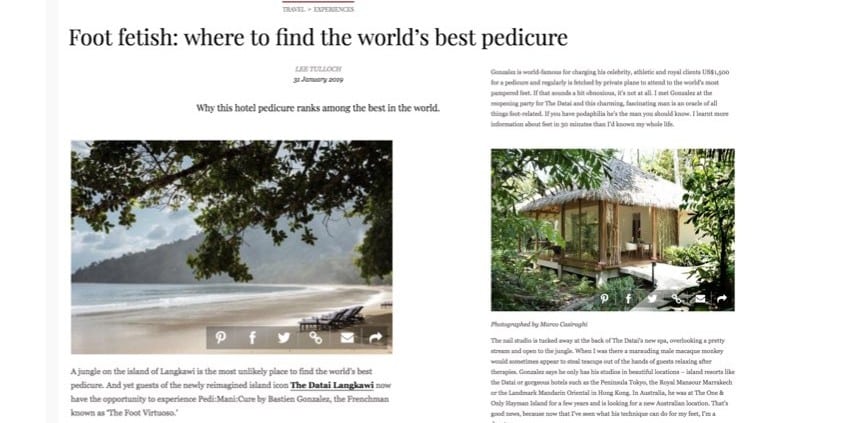 Why this hotel pedicure ranks among the best in the world.

« A jungle on the island of Langkawi is the most unlikely place to find the world’s best pedicure. And yet guests of the newly reimagined island icon The Datai Langkawi now have the opportunity to experience Pedi:Mani:Cure by Bastien Gonzalez, the Frenchman known as ‘The Foot Virtuoso.’

Gonzalez is world-famous for charging his celebrity, athletic and royal clients US$1,500 for a pedicure and regularly is fetched by private plane to attend to the world’s most pampered feet. If that sounds a bit obnoxious, it’s not at all. I met Gonzalez at the reopening party for The Datai and this charming, fascinating man is an oracle of all things foot-related. If you have podaphilia he’s the man you should know. I learnt more information about feet in 30 minutes than I’d known my whole life.

The nail studio is tucked away at the back of The Datai’s new spa, overlooking a pretty stream and open to the jungle. When I was there a marauding male macaque monkey would sometimes appear to steal teacups out of the hands of guests relaxing after therapies. Gonzalez says he only has his studios in beautiful locations – island resorts like the Datai or gorgeous hotels such as the Peninsula Tokyo, the Royal Mansour Marrakech or the Landmark Mandarin Oriental in Hong Kong. In Australia, he was at The One & Only Hayman Island for a few years and is looking for a new Australian location. That’s good news, because now that I’ve seen what his technique can do for my feet, I’m a devotee.

At the Datai, Gonzalez, a trained medical Podiatrist, gave a demonstration of his technique, which is revolutionary in that it is so old-fashioned in many ways. Intrigued by his grandmother’s habit of buffing her nails to a pink shine with a chamois buffer, Gonzalez developed a technique that put the ‘cure’ back into manicure, treating nails in a way that is almost the opposite of what happens in the local nail salon. He never uses water or varnish.

Firstly, he says, never soak your nails. They’re porous, and they’ll weaken. Instead, clean nails are each wiped with a towel for two seconds to make sure they’re absolutely dry. The Gonzalez technicians will examine feet for problems, then start by clipping nails square, to limit the chance of them becoming ingrown. Glass nail files are used because they’re gentler and also more sanitary. That cuticle cutting and pushing back cuticles that happen in every other salon in the world – wrong! Bastien’s pedicurists and manicurists use a gentle dentist’s drill to pull out the dead skin around nails and then clean off the top layers, removing ridges and white spots. Cuticles are massaged with oil… »

Hot-foot it to the pedi king for the £140 makeover