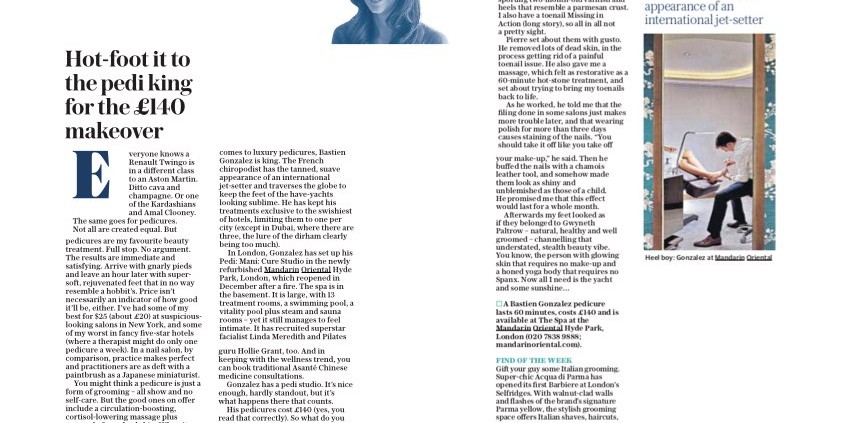 « Everyone knows a Renault Twingo is in a different class to an Aston Martin. Ditto cava and champagne. Or one of the Kardashians and Amal Clooney. The same goes for pedicures. Not all are created equal. But pedicures are my favourite beauty treatment. Full stop. No argument. The results are immediate and satisfying. Arrive with gnarly pieds and leave an hour later with super- soft, rejuvenated feet that in no way resemble a hobbit’s. Price isn’t necessarily an indicator of how good it’ll be, either. I’ve had some of my best for $25 (about £20) at suspicious- looking salons in New York, and some of my worst in fancy five-star hotels (where a therapist might do only one pedicure a week). In a nail salon, by comparison, practice makes perfect and practitioners are as deft with a paintbrush as a Japanese miniaturist.

You might think a pedicure is just a form of grooming – all show and no self-care. But the good ones on offer comes to luxury pedicures, Bastien Gonzalez is king. The French chiropodist has the tanned, suave appearance of an international jet-setter and traverses the globe to keep the feet of the have-yachts looking sublime. He has kept his treatments exclusive to the swishiest of hotels, limiting them to one per city (except in Dubai, where there are three, the lure of the dirham clearly being too much).

In London, Gonzalez has set up his Pedi: Mani: Cure Studio in the newly refurbished Mandarin Oriental Hyde Park, London, which reopened in December after a fire. The spa is in the basement. It is large, with 13 treatment rooms, a swimming pool, a vitality pool plus steam and sauna rooms – yet it still manages to feel intimate. It has recruited superstar facialist Linda Meredith and Pilates guru Hollie Grant, too. And in keeping with the wellness trend, you can book traditional Asanté Chinese medicine consultations.

Gonzalez has a pedi studio. It’s nice enough, hardly standout, but it’s what happens there that counts… »